Long before I ever had an interest in politics, my great gran used to tell me stories about canvassing for her party and standing as a councillor. The only anecdote I can recall is about a delivery drop when a man chased her down the road after reading a leaflet to announce that he wouldn’t be voting for her but, not to worry, because he wouldn’t be voting for “any of those other buggers either!”

At the time, I never imagined that I’d have similar stories of my own but I often wish she was still about to compare stories (and I wonder what she’d think about me campaigning for the Lib Dems!)

Before she died, she gave me a large envelope full of some of the letters and documents she’d kept over the years and I was looking at them today when I found some of her old campaign literature and correspondence. I’m sure she wouldn’t have minded me sharing them with you now and it’s interesting to compare some of the Tory messaging under Thatcher with the Lib Dem and Tory messaging that we have under the Coalition today. 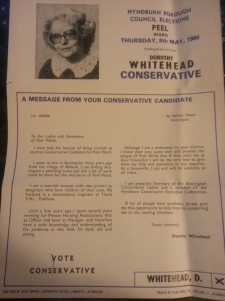 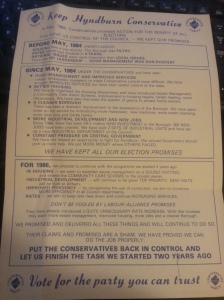 This is a photo of the front and back of the leaflet. I think it’s interesting to note the focus on local issues and no mention of the national picture, something that can be seen all over Tory and LD leaflets today!

Grandma wasn’t sucessful in her campaign: 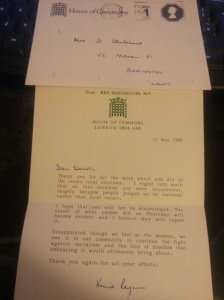 The letter she got from the MP about her campaign noted, again, the problems in getting the electorate to focus on local rather than national issues. This is something that hasn’t changed much and that Lib Dem councillors have struggled with greatly since 2010.

It is evident from the other letters in the bundle that grandma must have been campaigning with her local party for a while before her candidature. Activists generally get all-member emails these days so letters like those below must have been nice back in the day! 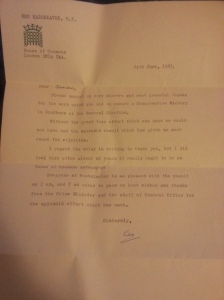 I also found the candidate list for the local Hyndburn elections in 1986 which gives an idea of the political make up of the area at the time (and even includes a Mr. Holden standing for the Liberal-Alliance in Overton, I do hope he’s another relative!) 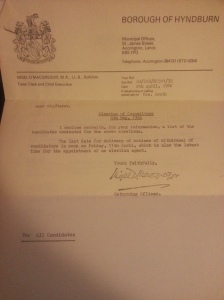 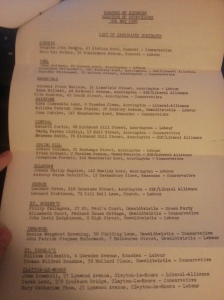 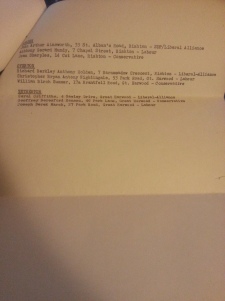 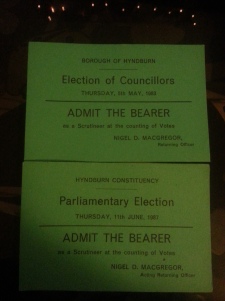